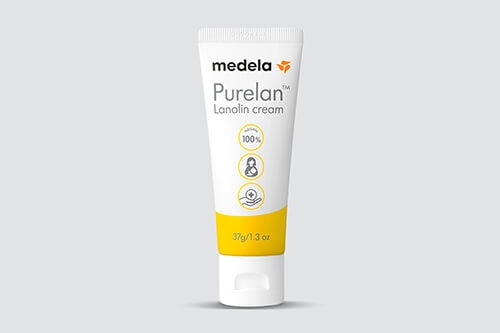 In the first few days and weeks of breastfeeding, many women experience nipple soreness and dry skin. Purelan lanolin cream gives you fast relief for sore nipples and dry skin. Purelan creates a protective layer on skin’s surface and is absorbed deeply by the skin, where it rehydrates from within – restoring the skin’s natural moisture balance.

Also available in the following sizes for professional use:

Lanolin is a deeply hydrating, naturally occurring substance found in sheep’s fleece. The lanolin in Purelan nipple cream is ethically-sourced, using wool from mulesing-free farms. It is highly purified and tested to the industry’s highest standards (European and US Pharmacopoeia). When absorbed into the skin, Purelan lanolin cream mimics the skin’s natural ability to store moisture and can hold more than twice its weight in water – naturally helping skin’s rehydration.

Use Purelan at every feed to relieve soreness and protect your nipples. Best of all, it's safe for moms and babies, so there is no need to remove Purelan before breastfeeding! Purelan can also be used for babies and children to protect their sensitive skin during cold weather while treating dryness, wherever and whenever needed.